100v 25w 50/60Hz 0.85A
The Playdia (プレイディア) Quick Interactive System (QIS) is a game console that was released in Japan by Bandai in September 1994,[1] less than three months before the Pippin platform was jointly announced by Apple Computer and Bandai.[2]

In 1994, Bandai CEO Makoto Yamashina (山科 誠) had predicted to The Wall Street Journal that the company's interactive sales would surpass that of toys by US$ 1 billion by the year 2000. The Playdia platform was first announced as the BA-X Bandai Home Entertainment Interactive System at the Tokyo Toy Show in June 1994 and featured new advancements, such as a CD-ROM drive and a wireless "Infrared Rays" controller.[3][4]

The Playdia was released in Japan on September 23, 1994, beating the Sony PlayStation and Sega Saturn to market. It also targeted younger audiences than the other console makers. Bandai hoped to sell 200,000 consoles and 300,000 titles within its first year.[3]

By 1995, the Playdia had been overtaken in the Japanese edutainment market by the less-expensive Sega Pico.[5] In response to soft sales, Bandai repositioned marketing of the Playdia to target older customers and released the higher-priced Elements Voice Series, featuring Japanese pop idols.[3] By then, Bandai had partnered with Apple to develop the Macintosh-based Pippin Power Player, which had been scheduled for release during the following Christmas shopping season.[5]

After the Playdia platform was discontinued in 1996, unsold consoles were repurposed by Banpresto, a subsidiary of Bandai, into coin-operated kinetoscopes called Micha King (みちゃ王) that played anime clips in Japanese arcades and stores.[6][7]

Nearly every title for the Playdia was published by Bandai. Most took advantage of the CD-ROM format to present full motion video, though with simplistic gameplay. Launch titles were targeted towards young children and at least 8 promotional discs were given away or included with the console. However, soft sales drove Bandai to introduce releases for older audiences in 1995, which included higher-priced titles focused on Japanese pop idols. Improved sales helped Bandai mitigate initial losses on the platform.[3] 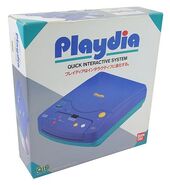 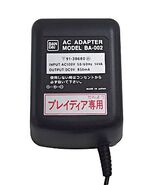 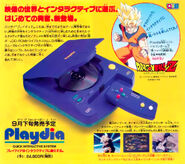 Magazine ad with a Playdia console and Dragon Ball Z

Community content is available under CC-BY-SA unless otherwise noted.
Advertisement